Comments on "Gas drilling may not be top issue for voters in Pa. governor’s race," http://stateimpact.npr.org/pennsylvania/2013/11/18/gas-drilling-may-not-be-top-issue-for-voters-in-pa-governors-race/

Why should ordinary Pennsylvanians take fracking to be an important campaign issue when some of the people most negatively impacted by natural gas development have gotten on board with a candidate--John Hanger--who claims that despite all of its well-documented hazards, "[s]hale gas in the US is no Ponzi scheme, resting on sketchy reserves, as some have recklessly asserted, but a durable economic bonanza that could return energy intensive manufacturing jobs to many communities" (http://www.theguardian.com/com.... No one buys into the Saudi Arabia of natural gas bridge to renewables argument more fervently than John Hanger--and no one should know better just how flawed is this reasoning than residents of Dimock. So to see just such folks--and their compatriots in, for example, Breath Easy Susquehanna County--fall behind a gubernatorial candidate who rejects his own party's moratorium resolution is at least baffling--and it is certainly disappointing (http://www.hangerforgovernor.c.... 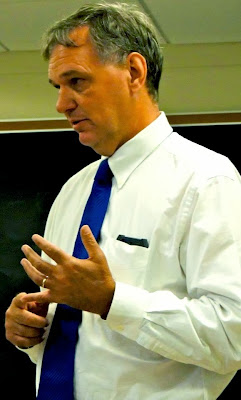 But besides these, it is rank hypocrisy to bemoan the fate of the "citizens of the Commonwealth" all the while endorsing a candidate who is as deep in the pockets of the gas companies as any Republican, and promoting practices--"best practices"--that will encourage only more fracking with its immediate consequences in disease and its long-term consequences as climate change.

As for Patrick Henderson--the only place beyond which we need to look no further is Pennsylvania legislation like SB 259/HB 1414 HB 1717, SB 367, and HB 1576--just to name a few, all written by and for the gas companies to expedite their profit margins at the expense of our private property rights, our health, our endangered species, and our public lands.

Henderson's reference to Act 13's provision to ensure "that health care professionals have access to this [exposure to toxins] information" is particularly perverse since this provision includes the infamous gag order on physicians in direct violation of the Hippocratic Oath as well as the principle of informed consent--and in so doing trades the health and welfare of Pennsylvanians for the protection of frack chemical trade secrets. To boast that this is good for Pennsylvanians takes the sort of arrogance that the Corbett administration is known for--but that John Hanger has also done very little to oppose.

What these polls suggest is only that the gas industry pitch to "cheap, abundant, American!" has been successful--and that's not surprising. After all, polls also show that many Pennsylvanians remain unconvinced about climate change, evolution, and the fundamental humanity of gay and lesbian people--but climate change is very real, evolution is a bedrock of the life sciences, and that we're even still debating fundamental humanity should embarrass us.

Fracking, its massive industrializing infrastructure, its contribution to climate change, and its potential to destroy entire ways of life--especially in rural communities--is also very real. There are no "best practices" or "regulations" or "middle grounds" that will accomplish anything beyond slowing slightly the rate of irreversible harm. And until we make THAT the clear issue for our fellow here in PA and everywhere there's frackable shale we will continue on the course of being converted into a resource colony for whomever is willing to pay top dollar for the gas.
Posted by Wendy Lynne Lee at 6:40 PM

Response to the claim that a severance tax would have prevented the frack-tastrophe:

Fact is, a severance tax accomplishes nothing with respect to compensation for disease, community destruction, and the ultimate contribution to climate change of not leaving the gas in the ground. Money--regardless the amount--cannot cure CANCER; money cannot repair damaged lungs, brains, cardiovascular systems, musculatures, or fetal damage. Money cannot recreate community cohesion once it is destroyed. Money will not magically recreate an endangered species once it is decimated. Money cannot return a fragmented forest into anything but a dull yard. Money cannot rebuild a mountain top flattened by bulldozers and gutted with pipeline.

To argue that a severance tax would have been an acceptable answer--some sort of panacea--to address the disaster that is industrialized extraction is like arguing that rocks (in this case shale) have magical healing powers.

Amount of compensation, moreover, for the very few whose royalties are substantial can never make up for the losses to health, property value, community, and ways of life for the many who will bear the burden for that few. The idea that throwing more money at property owners who own enough land to profit off extreme extraction will make up for the damage done to their neighbors is trickle down economics at its most perverse. The wealthy whose land and water is destroyed WILL leave. And the less advantaged will be left to clean up an irreparable mess.

Both the impact fee and the severance tax are part and parcel of what I have begun to call "Cadaver Cosmetics," namely: put a little lipstick, some blush, and a dab of mascara on the cadaver that is Pennsylvania after the vampire-drillers are done sucking her veins dry and no one will know the difference. Plant some grass and shrubs where that mountain was, put a picnic table on it, and after a while no one will know the difference--or rather, they just won't be able to trace the disease to its source--and that's all that matters.