The Corporatization of American Democracy: Slickwater Horizontal Hydraulic Fracturing and the Extortion of “The Good American” 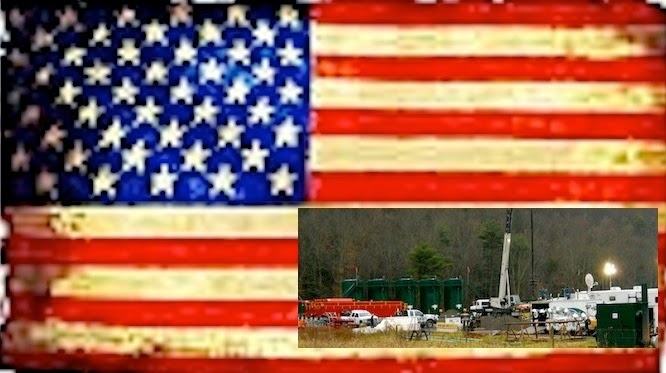 Below is an updated, white paper style, version of a somewhat older paper. It includes a bibliography for more convenient sourcing, and updated examples of my argument that advertising for the natural gas industry is both a cynical ploy to manipulate concession to the industry's destruction of our air and water--and thereby a wholesale debauchery of the promise of American democracy. As the years of the liquidation of our forests, farms, and fen have worn on, and reports of water and contamination become ever clearer, natural gas industry propaganda has become even more desperate to appeal to patriot-saturated fear-mongering over "national" security" and "energy independence"--both of which are actively undermined by the industry's hell-bent-for-leather exports to a global marker where the highest bidder determines the price of that gas.

The Corporatization of American Democracy:
Slickwater Horizontal Hydraulic Fracturing and
the Extortion of “The Good American”

While it is important to be clear about these hazards, my aims here are not about—at least directly—the hazards per se—all of which are well established and publicly available. My claim is that fracking is a concrete, visually compelling epitome of the much bigger crisis of American democracy, namely, the corporatization of state and federal government through, among other tactics, appropriation of the patriotic and thereby disarming discourse of the “good American.” The consequences of this appropriation include not only a fundamental and potentially irrecoverable corruption of the very language and imagery of the public good, but substantial risk to the conditions upon which this good depends—clean water and breathable air.

Posted by Wendy Lynne Lee at 1:00 PM No comments:

Environmental Cultism, the "Endgame," and the "It's just a different strategy" Vocabulary: Why Movements Fail

In light of some very thoughtful recent remarks on an older piece posted at THE WRENCH, I have returned to thinking about environmental cultism. But--serendipitously--it's not only these remarks that have generated this return.


I have been confronted by a truly disturbing strain of environmental cultism masquerading as "the professional activist" that I find both interesting philosophically--but troubling ethically. This form of cultism personifies a Derrick Jensen-like Endgame willingness to deploy a "by whatever means necessary" manipulation, name-calling, fear-mongering, misrepresentation, and exploitation in the name of the anti-fracking movement--but to ends far more self-interested and prosaic--but self-deluded and arrogant.

While it's certainly true that we sometimes do appeal to ends we hold to be laudable to justify means with which we have discomfort, and while there are good questions to be asked about what ends justify what means--the committed cultist appears to believe that the ends of preserving the entitlement presumed to accrue to the cult/group/ideology justifies whatever means are necessary to achieve that end.

The trouble is that it does not--especially when the means involve the violation of values we'd all agree were worth preserving--honesty, forthrightness, humility, compassion, courage, thrift…

These are issues that return me to philosophy--not that I've never left--but with some renewed interest in that fraught connection between thinking and action, ideals and activism.

Movements can be fertile ground for a kind of cultism in the sense that the sheer urgency of the issues--and fracking certainly provides that--make for many of its elements: a siege mentality, an insistence to conformity to a certain ideology--in this case, an incoherent ideology about how the movement must be willing to include virtually every point of view, even manifestly self-undermining and/or inconsistent ones in order to reflect a commitment to "diversity" or "tolerance."

I think this is deeply mistaken and misplaced.

Such notions of "diversity" or "tolerance" are at least very shallow. "Let's just all get along," and "we're a rainbow of perspectives" may reflect a diversity of attitude--but they will not achieve any objective other than the status quo. Anti-Apartheid activists did not "just get along" with that regime's violent enforcers. A firestorm ensued on these pages when I insisted--and still insist--that the "responsible drilling" message of the Responsible Drilling Alliance was wholly inconsistent and self-defeating for an anti-fracking movement (THE WRENCH: Of Aristotle and Anadarko: Why “Better Laws” Will Never be Enough). This is not to say that RDA exemplifies the cultism I am exploring here, but only to suggest that one characteristic of a cultist group dynamic is the insistence that whatever are its values--say, diversity and tolerance--that they're beyond critical examination even where their application results in inconsistency--and sometimes actions that may be positively harmful

Such notions are also self-defeating because they prevent that movement from adopting a clear message or objective. They fundamentally fail to make the vital distinction between differences of strategy and difference of objective. We must encourage and sustain the former; we cannot afford to brook the latter and be a movement.

Let me put this another way: while there are no objectives that we ought to regard as beyond the pale of critical review, there are objectives upon which we can take a firm stand. Banning fracking is one. Prosecuting sex-traffickers is another. Acting to mitigate climate instability is yet another. What makes these objective clear are the moral arguments combined with the compelling scientific evidence that supports them.

Strategy is another matter altogether. There are often many roads that lead to Mecca--actively encouraging these--in light of the objective that's clear-- is surely the very stuff of a successful movement.

A sure characteristic of cultism is the propensity to demonize those who'd argue for that unifying message as "purists," as "intolerant," or even as the enemy. This is a variety of the fallacy of projection: projecting onto others qualities undesirable or ethically problematic in oneself.

The other very troubling feature of this tendency to cultism is that, having adopted the legitimating narrative of the cult's ideology and thereby acting in the name/interests of that ideology, one is legitimated in assuming that the ends virtually always do justify the means, and that critical self-reflection about whether in any particular case this follows can be conveniently forgone. That, I'd argue, can lead to the rationalizing of very bad behavior--deception, omission, manipulation--all in the interest of reinforcing ideological hygiene.


So I have also been thinking a good deal about language. This new word--"purist"--seems to have recently entered the anti-fracking activist vocabulary, and it is used to disparage those of us who take a resolute stand that we must be unified on message--even if varied in strategy.

It is not purist, but rather simply coherent, to argue that the claim that fracking must be banned is inconsistent with the claim that it can be regulated and/or mitigated. Fracking cannot both be banned and regulated. Regulated fracking is fracking--hence not banned. Indeed, the concession to regulation and/or mitigation undermines every effort we make to realize that ban. That is not a "purist" position. It is simply true.

Moreover, a unified message does not preclude the possibility that we could discover that we are wrong. The Ancient Greeks had a marvelously well-articulated view of the universe--and copious evidence to support it mathematically, observationally, and technologically--that was dead-in-the-water wrong: geocentrism. We must always remain open to this possibility. That is called humility before the facts, and while the likelihood that we are wrong about climate instability and the dangers of continued extraction is profoundly unlikely--we must remain vigilant and self-critical.

This self-reflection includes whether fracking should be banned. The evidence weighs heavily on the side that fracking must not only be banned, and that the notion that it even can be regulated in non-sensical. If we do not become unified--thoughtfully, self-reflectively--about that message, this movement is doomed.

And this leads me full-circle--for now. A movement must be FOR something. The end of fracking is like the end of apartheid or concentration camps or sex-traficking. It is not purist to insist that there is no compromise; it is the only position that, on the current well-established evidence, has moral credibility.


To then be called the "purist" because I reject this "inclusion" as incoherent and paralyzing suggests that there is some other motive for the name-calling, that something else is being protected. And that leads me back to the environmental cultists.

More of this later.