While it may be true that the Press Enterprise didn’t publish the Ku Klux Klan flier “to promote or endorse” white supremacism, it’s Kendron’s insistence that PE editorial decisions are driven by journalistic integrity that’s the fig leaf—one intended to cover crass opportunism.

Kendron knows that salacious details sell papers, and while news demands an unbiased account of the facts, obscuring the KKK phone number would neither have detracted nor altered anything of substance in the news coverage. The claim that including the number helps us “face our fears” is absurd.

Were the PE interested in news, it’d tell the truth about the relationship between the growth of hate groups, the election of Trump, and the confirmations of his Attorney General, Jeff Sessions, his corrupt, climate change denying, EPA director Scott Pruit, and his anti-education, privatize it all, DOE director Betsy Devos.

But just like Trump knows his base doesn’t give a tinker’s damn about niceties like a free press, the PE knows its 30 Seconds readers are more interested in having their biases confirmed than fancy notions like news. Kendron knows that printing that number titillates the Trumplodytes who, buoyed in their bigotry by a kleptocratic white nationalist for president, feel perfectly just calling Michelle Obama an Orangutan (30 Seconds, 2.25).

It “justifies” a travel ban on Muslims even though we know neither geography nor religion are reliable indicators of terrorist affiliation. Printing that flier as if it were like any other advertisement aligns the PE with NewsMax and Breitbart—the rags of Steve Bannon’s alt-right. However much a fig leaf the PE story offered to decrying racism, Kendron knows the flier confirms local bigots who support the repression of voting rights via racist Voter ID initiatives.

Who needs the Klan when you’ve got 30 Second frequent fliers who deploy free speech to demonize everyone and everything not them? It’s deluded to defend Trump against his weakening of regulations to protect puppies; it’s demented to thank a butcher like Putin for helping Trump win; it’s daft to believe a swamp glittering in Goldman Sachs will trickle down its wealth. It’s nuts to think the “free market” can make healthcare accessible to poor folks, or that appeals to “state’s rights” will protect gay kids.

As for “facing our fears,” it’s ironic that while we’ve plenty to fear from the Trumpster’s militarist, anti-science, Islamophobic, bigotry-soaked agenda, his sycophantic followers stand to be harmed the most when the only jobs that materialize are low wage “right to be fired” jobs, or when education becomes just another product—the real thing for the kids of the wealthy, and the knock-off on-lines for the rest.

It’s hard to admit you’ve been had by hucksters.

Kendron’s excuse-editorial for printing that number is like CPAC’s pretense that Robert Spencer is an outsider to conservative values: it forgets that the very platform upon which it would decry racism is paid for by racists.

Here’s a suggestion for the next edition of the PE: print a flier calling out Brandon Eyerly to demand its editors produce a newspaper instead of a tabloid, or fire them: 570-387-1611.


We don’t believe in fig leaves – those comforting, but useless, courtesies that let people say they did everything they could to shield people from ugliness while still allowing the ugliness to exist.

So on Tuesday, when we published a story about some hateful Ku Klux Klan flyers showing up in Berwick, we also printed the flyers in their entirety. But we didn’t do it to promote, or endorse, those views.

We did it because it’s news. It’s ugly, it’s dismaying, but it’s news.
Some have asked why we didn’t blur or crop the flyer so contact information for the KKK group would not have been visible. It certainly would have made our editors’ phones ring less.

But it would have been a fig leaf.

Even if we hadn’t published the phone number, a person looking for like-minded haters would have had no trouble finding the Klan via the Internet. Before even seeing the flyers, it took our reporter only about two minutes.

The vast majority of our readers – who know a white cloak and hood are about as in fashion as knickerbockers – wouldn’t be enticed into membership just because they had the Klan’s phone number. But they now have a better idea of who or what has been skulking around Berwick, trying to stir up hate.

We are not a nation of cowards. Most of us are descendants of people who uprooted their families and took huge risks in search of a better life. There were no fig leaves to hide the challenges they faced. They had to confront their fears. And so should we.

So if those flyer reprints upset you Tuesday, good.

Get to know your neighbor who’s from a different culture.
Reach out to the family who sits alone in the church pew on Sunday.

Maybe even call the East Coast Knights of the True Invisible Empire — you have their number — and tell them in no uncertain terms that Berwick, Bloomsburg and Danville are not fertile recruiting grounds for their hateful tribe.

Bette Grey, 57, of Arbor Street says she’s lived in Berwick all her life and she’s never encountered such hateful beliefs.
And when she told council members about the flyers Monday night, council President Alvin Hill assured her such ideas have no place in the borough.

Grey says she and her husband, Robert, found the first flyer in their yard on Friday, then another one on Sunday afternoon when they came home from church. Both times, the leaflets were tucked neatly under a bag of rice in the grass, Grey said.

At first, Grey, a former councilwoman, thought she was being targeted because of her political activism.

But at least six other neighbors got them, too. Some of them had different messages than the ones Grey received, she said.

Hers questioned the lack of a “white history month” and touted the accomplishments of white people over the centuries. It states the “technological advancements of our people — from the megalithic calendar of Stonehenge to the moonwalk of the Apollo astronauts — are unequaled.”

Grey said another neighbor’s flyer says God loves the KKK, and encourages white people to be proud of being white. None of the flyers were put in mailboxes, which would have been a federal offense, and all were weighted with rice.

The Klansmen knew what they were doing, Grey said.

The pamphlets also provided a website and hotline number for anyone wishing to join the group.

Considering the political climate in the country, Grey’s afraid these leaflets are just the start of trouble, she said.

“I think you’re going to see more of this stuff,” Grey said. “Hate crimes will start.”

Berwick Police Chief Ken Strish says he’s been made aware of the handbills. The ones on Arbor Street are the first of their kind in the borough, he added.

He urged residents who see anyone distributing the flyers to call 9-1-1.

It’s not clear the pamphleteer is breaking the law, but police at least want to talk to the person, Strish said.

Same group
The papers are the work of the East Coast Knights of the True Invisible Empire, a Klan group with a home base in Rising Sun, Maryland, just over the state line. It was the same group that distributed flyers in the 800 block of East Third Street in Salem Township in September.

According to the group’s website, the East Coast Knights are a “traditional Klan” that seeks to “ensure a safe and secure future for Caucasian Americans.” 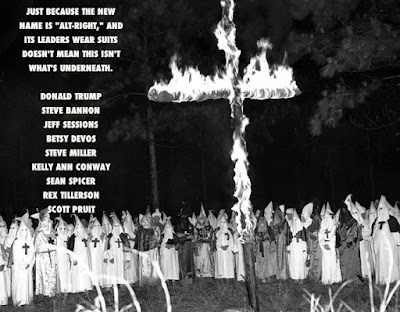 “We do not preach hate, and at no time would we react hatefully to any man, woman or child,” the website proclaims. “We strive to cleanse the Klan name by our positive actions.”

But Grey’s not buying their “positive” message.
“It frightens me,” Grey said. “This is significantly nasty.”

Grey said that’s why she was taking her concerns to council.
“It’s not that I want to draw attention, but I want people to be informed,” she said.

Hmmm; Lightstreet. I was close enough in my recollection that it was something sounding similar to Gaslight Street, that Ad Hominem Manor is on.

You really do have a thing for me, don't you Mr. Frost? You just can't help yourself. But that's not because you have anything at all to say.

More like, everybody EXCEPT me knows NOT to pipe up here anymore because they know that they'll be gaslit.

Gaslit? Hardly. You don't deserve that much attention. And you HAVE no idea whatever with whom I correspond or how far my reach is. I do, however, think I'm done with the insipid.