The following is a comment posted in the regional newspaper, The Press Enterprise, call-in feature "30 Seconds." The caller identifies herself as Evy Lysk--a frequent flier whose anti-Islamic, racist, misogynist bigotry has a long and well-established history:
"Travel ban motovates BU protest. Student calls Trump moves "reminiscent of Nazi Germany." Save yourself and drop out of college Jessa Wood. You have been brain-washed by your liberal professors. I'll tell you who's moves reminiscent of Nazi Germany. It's ISIS. To Professor M. Safa I asked you way back. "Do you support sharia law?" I never did get an answer. Miss Wood ask him is he for Sharia Law. If you don't get an answer then that should tell you he is for it. Sharia law does not give women rights--that law kills women. Miss Wendy, yes wear a hijab, but have it cover you whole face and make America beautiful again. Go Trump!"
Let's analyze Ms. Lysk's comment:
Setting aside the poor grammar, misspellings, and the fact that she does not know Professor Saracoglu's name, Ms. Lysk does offer us an opportunity to sharpen our capacity to detect fallacies, unwarranted assumptions, and very poor logic.

1. Lysk claims that BU Professors are "liberal." But she neither defines what "liberal" means, nor does she offer any evidence other than that BU community members orchestrated a very successful protest, one, in fact, whose numbers were significantly under-reported by the Press Enterprise at 100, when the actual number was far close to 300. She appears to assume that BU professors organized the protest--flatly false--and that BECAUSE they did so, BU students must be "brain-washed." This assumes, of course that BU students are children. False, and that BU professors have some sort of magical "brain-washing" power. False. BU students organized this action--with very little time and to very powerful effect. They should be applauded for their initiative and discipline. BU is fortunate indeed to have such thoughtful and committed student citizens.

2. While not bothering to check his correct name, Lysk refers to BU history Professor Safa Saracoglu as a defender of Sharia Law. But like "liberal," she fails to define what that means---she simply assumes we all know it's bad. To be clear, I am neither defending nor decrying Sharia Law--but it is question-begging to assume your audience knows and understands to what you're referring without any additional definition or clarification. The overwhelming likelihood is that, given Ms. Lysk's past history and references, she is appealing to a far right wing website like Infowars or NewsMax--neither of which are remotely credible sources for, well, anything.3. Lysk commits fallacy of appeal to ignorance: She claims that because professor Safa Saracogluu did not answer her very likely loaded question about Sharia Law, that this means he supports it. But no such conclusion follows--and absence of evidence (his not providing an answer) is NOT EVER evidence for some other claim (such as, he supports Sharia Law). This is simply Lysk's way of making an accusation for which she has no evidence whatever--and it assumes a definition of Sharia she has not provided. In short: Lysk set a trap, and Professor Saracoglu didn't take her bait.

4. She then claims that Sharia Law "does not give women rights." But rights are NOT given. Rights are recognized, and Ms Lysk's own view of women's rights is made clear in the very next line where she refuses to address me as Professor Lee--a fact she has been aware of for at least 15 years. Indeed she does refer to "Professor Safa," but not to "Professor Lee." This makes very clear her own patent sexism, a fact confirmed by her claim that I should wear a hijab to cover my "whole face." In other words, I'm a legitimate target for ridicule because, according to Lysk, I'm an ugly woman--one not deserving of the recognition of human rights. This, of course, is ad hominem: attack the person instead of their argument--and it is the common recourse of the assailant who has nothing else to offer in defense of their claim.

Lastly, it's very unclear what Lysk's claim is other than "Go Trump!" But that's not a claim--it's just an exclamation, one as groundless as her comment.
Nonetheless, this is precisely the kind of frenzied, irrational, and bigoted fodder that far right supremacist groups like this one feeds on.

The point is not merely that Lysk is a racist and sexist bigot--she makes that clear on many occasions in 30 Seconds. The point is that she knows she has an audience for this horse-pucky--and that audience put a fascist into the White House.

That audience would ban Muslims from entering the United States because they are Muslims--and it has a president who will utilize every nefarious means at his disposal to fulfill that promise.

That audience holds that the drowned child of the Syrian refugee is less valuable than the child of a wealthy white real estate mogul.

That audience will remain silent as the new president makes it impossible for citizens to know whether their new puppies came from puppy mills.

That audience will allow the president to sell off the country's national parks as private drilling sites to his cronies.

That audience thinks reservations are the natural condition of Native Americans, and would just as soon see the bravery and citizenship personified in the siege at Standing Rock crushed as give up driving their Jimmies. 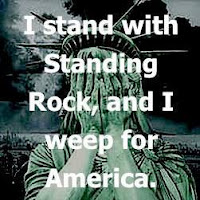 That audience confirmed the far-right charlatan and donor Betsy DeVos for education czar, a religious ideologue poised to destroy public education and use tax dollars to rape the separation of church and state. DeVos is more concerned about Grizzlies attacking classrooms than she is about whether children become literate. Come to think of it--far better for the Trumpledites that we remain illiterate and ignorant. That's what makes DeVos perfect for education secretary.


That audience celebrates ignorance as a virtue.

That audience silenced Elizabeth Warren for daring to read a letter written by Coretta Scott King that lays out the bigotry of Jeff Sessions who, if confirmed as Attorney General of the United States, is likely to preside over the most racist and repressive voting restrictions the country has ever seen.

That audience would foul its water and air beyond reclamation in order to deny climate change.

That audience mouths "Energy Independence" and "jobs" as if these were magic-bean words--even after the evidence is made clear to them that hydrocarbon exports will weaken national security.

That audience made a CEO of Exxon-Mobil and "Friend of Putin" its Secretary of State.

That audience would rather be ruled by the autocracy/kleptocracy of a psycho-maniacal child-king via Twitter than do the hard work of actually being citizens.

That audience would allow the complete militarization of the police--making our communities effective fiefdoms of martial law.

That audience mistakes power for justice--at the absolute peril of the latter and the ultimate self-defeat of the former.

I could of course go on. But this is surely sufficient to show how important it is we remain not merely vigilant but insurgent against this tyranny.
Perhaps Lysk thinks a desiccated environment dominated by uber-wealthy white guys is a suitable life.
I do not.

And I will resist the violent illogic of the Trumpledite Autocracy until that moment sanity returns to our civic discourse and to our country.
Wendy Lynne Lee