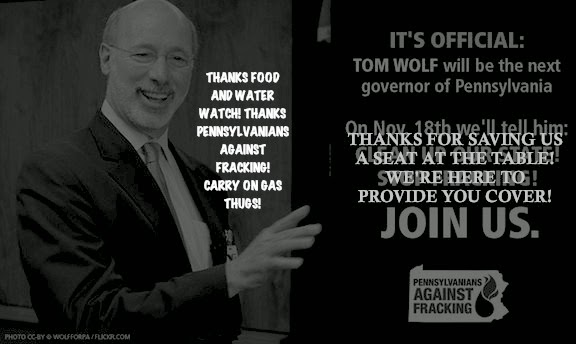 Despite the fact that I won't be looking to solar panel the Lt. Gov's digs in Harrisburg any time soon, I have to say that the incredibly kind messages and comments I received yesterday in support of a Green Party platform was nothing short of a bright burst of sunshine on a politically bleak day.

I have much to say about last night's expected victory  for the Democrat Tom Wolf--but perhaps the most important, to me anyways, is this:

However much Corbett was a disaster for Pennsylvanians, for education, for social and economic justice, and for the environment--and he surely was--Tom Wolf portends nothing short of an even greater one.

There are at least two compelling reasons why:

1. While Governor Elect Wolf may indeed restore some funding for education, he will do it by robbing Peter to pay Paul. That is, he'll fund education via dollars soaked in the iniquity of gas money--and he'll do it in a fashion that will insure his re-election:

a) Tax the gas industry just enough to make a show of it. The gas thugs will feign distaste--but in fact they'll get everything they want and more.

b)  The "more" are the pipelines. As these have been the frontline in the struggle for clean air and water, so they shall remain, and the gas thugs know that whatever pittance they are forced to cough up in some sham of an extraction or a severance tax, they'll make up for that handsomely once the gas is flowing through high pressure arteries to the LNG export depots.

c) We can count on Wolf to talk--for a minute or so--about "tight regulation." but this will quickly be eclipsed by his work to restore funding to all the agencies and programs that will require that regulation to be effectively nullified. We need to be very clear about this: regulation will reduce the number of dollars Wolf can skim from the gas thugs via his sham tax. Therefore, the pressure to regulate less--and produce more gas to pump through these pipelines-- will be enormous. We will see a pretense to regulation, a smattering bit of hang-wringing to make it look like he cares. But with his other hand, Governor Wolf will be shaking the oil-stained fingers of the gas thugs who will pad his re-election coffers for 2018.

2. Even more menacing are the Fake Greenie organizations--PennFuture, Food and Water Watch, Berks Gas Truth, Pennsylvania Voters Against Fracking, Pennsylvanians Against Fracking, The Responsible Drilling Alliance, COGENT, Save the Loyalsock Coalition, who--in the interest of insuring their own seats at the table of a Wolf administration--will work tirelessly to reassure us that the governor is not in the back pockets of the gas industry.

They're already trying--some seem to really believe that they can move Mr. Wolf to a moratorium. But this is willful blindness of the worst sort--and while it might lure some folks into the complacency of believing that everything's gonna be alright, it is precisely that complacency that we cannot afford.

Indeed, nothing could more endanger the movement to erect community ordinances that demand the recognition of the right to clean air and water than complacency. So if you are willing to settle for the pretext of "alrightness," Wolf and his faux-green advocates like Cindy Dunn of PennFuture or Sam Bernhardt of Food and Water Watch are your people:

"Cindy Dunn of the environmental group PennFuture says her group plans to hold Wolf to his promise.

“When Wolf is sworn in as governor, he will swear to uphold the state constitution, which includes the environmental rights amendment,” said Dunn. “And this is something that I think he will pay attention to.” Dunn’s group supports the 5 percent severance tax, because she says it will raise more money and benefit all Pennsylvanians" (http://stateimpact.npr.org/pennsylvania/2014/11/04/what-wolfs-win-means-for-energy-and-the-environment/).

But if you're not prepared to be fracked and pipelined into ecological oblivion, be prepared to fight.

Dunn's inane comments are a a variety of trying to have your cake and it it too--except that it's not even that since PennFuture knows beyond a shadow of a doubt that Wolf will not advocate for a state moratorium on drilling, is concerned not one iota with the environmental rights amendment beyond its value as a tool for getting re-elected, and will not act in any fashion that will endanger that prospect.

Moreover, there will be virtually no pressure on him to press for a moratorium since he knows that these fake greenies will vote for him anyways.

Make no mistake about it:

We will see a pretense to "holding Governor Wolf's feet to the fire." But behind this will be standing to one side the gas companies and to the other the fake greens who cannot be described in any other way--at least honestly--than as effectively colluding with the gas. I say "colluding" because they cannot NOT know better. Nonetheless, they'll also continue to be willing to stand by silently while those of us who have stood on principle instead of political expediency are surveilled, arrested, and demonized as much by them as by the gas thugs.

Governor Elect Tom Wolf does offer us a celebratory cake--but its layers are saturated with drilling waste, its frosting tinged with benzene.

So when its celebrants offer you a piece, say "no thanks." Then tell them that you value you health, your property, your neighbors, your community, and your climate too much to eat from a banquet laid out in iniquity.

Then ask them why they sold you out.
Posted by Wendy Lynne Lee at 5:55 AM

If Wolf truly wants a moratorium , then as soon as he is in office,
he needs to do whatever it takes to get a moratorium in place, whether it's an executive , emergency order or whatever is needed .....he needs to do it right from the start....waste no time...if he truly believes that gas drilling is endangering us on many levels....he won't need to be pressured into doing it....

If Wolf had been in any way serious about a moratorium, he would have made it part of his platform for the election.

1. If he doesn't, he's kept his campaign promise to the gas thugs at the cost of the state (and the planet). And it makes that much clearer the level of denial in the fake greens.

2. If he suddenly reverses course (which is HIGHLY unlikely because it might doom his re-election), then we have very little reason to trust him sinc he has acted inconsistently.

The trouble is that Wolf clearly--in his own words--believes that gas drilling is a GOOD thing--and he isn't going to EVER look too closely because he cannot afford to find out the truth AND get re-elected AND level even a shadow of a tax--the one that only entrenches the industry that much more deeply in the state.

The thing is that even when he does NOTHING but abet the gas industry, these fake environmentalists are gong to stay with him--they have too much invested not to. They'll rationalize his failures, make them someone else's fault (like damning the messenger here), and exaggerate his work to "regulate"--all while the state burns.