Hike and Climb to the "Keyhole," Long's Peak, Colorado 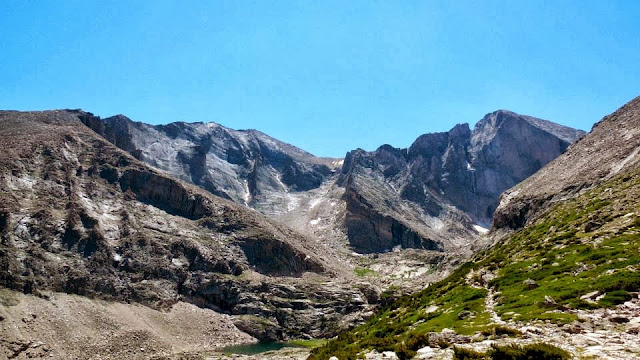 Like all sets of photographs, this set comes with a story--one I hope you'll all find at least amusing, and perhaps even gratifying.

This particular day of hiking turned out to be one of the hardest--and likely best--days of my life outdoors.

It began at 3AM, and a short drive from Estes Park, CO to the trailhead Ranger Station at Long's Peak. The moon was full, the air chill, and it was amazingly quiet. The photographs are in order of the day. 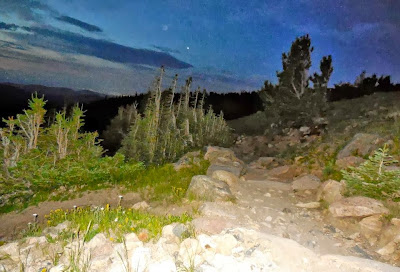 My hiking companion, Jack, knew the trail, and we set out. I was immediately grateful that I had thought to bring a hiking back pack, long jeans, my heavy University of Oregon Track hoodie, trail sneakers, and a water bottle. The trail to the Keyhole--the 12,000 or so foot "keyhole" shaped giant rock formation which serves as entry to the final ascent to the summit of Long's Peak (http://www.nps.gov/romo/planyourvisit/longspeak.htm)--is arduous to say the least. Rocky, steep, and jagged on all sides--there is no just walking. This is all hiking-climbing in one way or another. 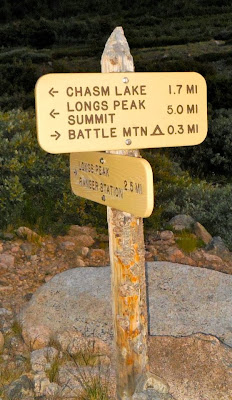 The sun coming up over the Rockies is--well, there's no word for this. "Splendiferous" comes to mind. But so does "tearful," "heart-breaking" and "riotously beautiful." Photographs cannot capture the boisterous magnitude of these mountains, their wildlife, their trees and flowers. No image can intimate the color. Look at the first few pictures. The trees back-lit by the upcoming Sun. The mountains just hinting their emergence in the deep distance.

We hiked up and over for some hours while the sun came up over those tremendous peaks.

I photographed vistas and flowers--the big and the small--and all of it was breath-taking.

But "breath" itself was also on my mind. I was struggling--TRYING--but struggling with altitude sickness--trying to get enough air, and trying to staunch a nose bleed. I was pretty damn determined that something silly like breathing and having to use my hoodie for a kleenex was not going to interrupt one second of this awesomeness.

Jack and I arrived at the "Boulder Field," and a very intimidating trail warning sign that reminded me of the sign just before you entered the witches forest in the Wizard of Oz--the one about how you should go back. Go back now. 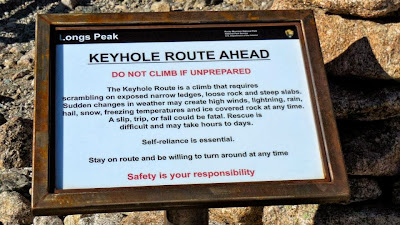 "Boulder" and "field" does not do any of what we were about to encounter justice. In fact, "encounter" doesn't either.

The "boulders" are automotive sized, jagged, sharp, and lacerating rock-weapons that lurch and jut out of the belly of the mountain. It’s easy-peasy to imagine them as alive and desirous of nothing but the blood splashing out of your head as you plummet into a fissure to your demise. They're the ENTIRE world while you're trying to clamor over them without shredding your hands and knees, and it's clear--especially when you can't breathe--that they want to eat you.

And this is no “field” unless by “field” what you mean is sharply inclined mine-filed of almost ludicrously proportioned projectiles.
Unless what you mean by “field” is the reverse of any image you have ever had from, say “Little House on the Prarie.” This is no shoeless dancy-roll up a hill. This ain’t no dance at all. This is something more like a grip-of-death climb where you move very quickly from “I got this” to “Jesus H. Christ!” to “”Dignity, Schmignity, all I want now is to live—and not here.” 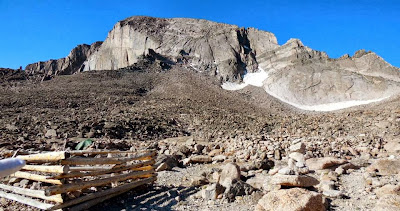 That I reached the Keyhole—a towering rock formation at about 12,000 feet—is truly miraculous. Or something. I was heaving and tingling, and realizing that absolutely no amount of marathon training is a substitute for rock-climbing training, and I did not have anything like the latter. 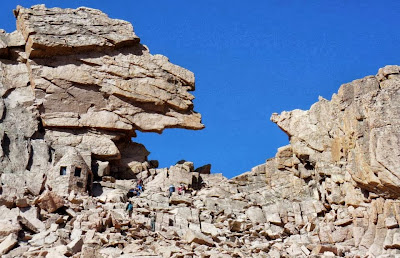 But what happened next is the real story: While the details don’t matter, I became separated from my climbing companion, and I found myself half hovering, half clinging to the rock face just a few feet under the precipice of the keyhole. I was there for nearly two hours in hopes of resolving the separation, and I began to shiver. Hard. I was freezing—and the wind. Oh. My. God. The Wind. Ripping. Tearing. Freezing. Fierce. And I could not move without risking falling. A gazillion feet. I began to feel that weird kind of sleepy that you feel when you’re just that cold. I determined that I had to get down off the boulder field.

I could not feel my hands or feet.

I had to take off my sock-gloves because I could not risk sliding down a sharp rock-sword.

And I began the climb down.

No, I mean ALONE.

The world has never appeared so enormous, empty or foreboding to me. It was at once so shamelessly gorgeous—stark and massive. But it was also too big. I could fall, and no ne would know. I could fall and no one would see. Or hear. 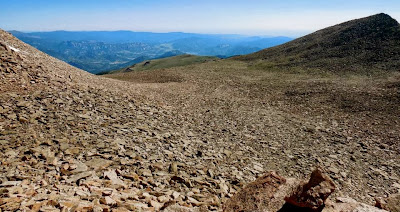 I didn’t climb down. I scrabbled, lurched, scooted, scraped, crawled, and cried my way down the Boulder Field.

I have never been so happy to have another 7 miles of arduous hiking in front of me in my life. 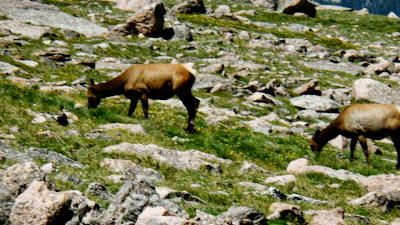 Have never cared so little that my best jeans were destroyed.

And I have not in a long while thought this much or clearly or deeply about just how unbelievably much I love my children, my mom, my people, my animals.

And I think about that stuff pretty often. After all, that’s what the anti-extraction war is about.

I warmed up. Finally. And was a little bit better able to breath. I was dehydrated and a bit desolate when I happened upon a wide swathe of Elk in a pasture just above timberline—swaddling about in an actual field of flowers and clover with their babies. They snorted and Ballyhooed, lumbered from this patch to that. I wanted to be home, and I wanted to be right where I was at 11,000 feet. I could almost feel the Elk’s warmth. As the color began to return to my face, as I took a last swig from my Gatorade bottle, I began to reflect on what had happened. I was OK. I was not hurt. I was OK. I began to sing to myself, and finally found my way back into the lush piney forest just under timberline. I laughed a little, realizing that I was singing “Somewhere Over the Rainbow” in my dad’s best Louis Armstrong impersonation. “Singing Satchmo in the Rockies” I said out loud to no one. And I remembered just how much I loved everything. 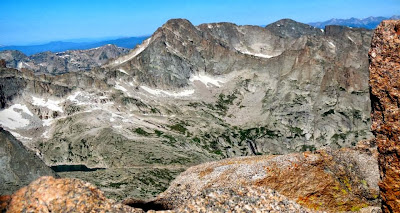